skip to main | skip to sidebar

"A university is what a college becomes when the faculty loses interest in students."

Posted by Pertinacious Papist at 4:38 PM No comments:

Old Dominion, NC (Reuters, 3/15/08) -- The Lenoir-Rhyne Commission for Athletic Excellence, created in October of 2006 to study possible expansion of the 127-year-old university, has presented a resolution asking the Board of Trustees to expand the institutional mission to serve a broader athletic constituency. "In order to better represent the future programming initiatives of Lenoir-Rhyne," said Nikita Cartwright Smith, LR Dean of Long-Range Planning, the Commission has recommended that changing the name for the 'Departments' of the university to 'Colleges.'"

The Board of Trustees, met jointly with the college’s Board of Visitors and Alumni Association Board, to consider the resolution on March 15. The Board reportedly voted to endorse the resolution and to begin the process of implementation.

Asked what the university stands to gain from the change, Smith responded: "All the great classic universities of the old world -- Oxford, Cambridge, etc. -- are built on the 'college' model. With our recent multi-million grants for a Bowling program at Lenoir-Rhyne, we believe it's time to move up with the heavy hitters." The university changed its name from Lenoir-Rhyne 'College' in 2003.

The Executive Committee of the Board of Trustees will review procedures involved in conversion to the 'college' divisions and will present a recommendation for implementation by the middle of the spring of 2008. "The trustees will then take action on the recommendation" at their next meeting in August, said Smith.

The commission was composed of university faculty and staff, students and alumni as well as community leaders. Smith noted that the group conducted more than 70 focus groups of various college interest groups. It has also asked these groups which of its strongest programs the university should seek to retain in the future. The commission also investigated which athletic educational programs the college may consider adding to better serve the region.

The commission reportedly has identified the following four strengths of Lenoir-Rhyne:

The commission further determined the following:

1. There are numerous options for expanding services and programs that will enhance the foundation of the institution, such as courses in Exercise Kinesiology, Exercise Science, Healthful Spa Use, Eating Your Way to a Better Sex Life, etc.

2. Lenoir-Rhyne University is in an unprecedented position of strength to expand its mission based on its solid financial standing, its growing enrollment, its community support, and its excellent athletic reputation.

3. A structural change is appropriate for the management and implementation of program expansion.

At the public announcement on the Ides of March, Professor Timothy Hick, a faculty member, asked how programs in majors with no more than two or three students and no more than one faculty member could merit the envisioned change. "How can you have a College of Classics or a College of French Language, when we don't even have professors to head up our existing 'Departments'?" he asked, noting the existence of programs without even have a single full-time professor.

Smith had no immediate comment.
Posted by Pertinacious Papist at 8:49 AM 3 comments:

Dean of Academic Programs fired for looking too good

Lenoir-Rhyne University Dean of Academic Programs, Dr. Haley Winter, was fired this morning, according to sources inside the University, for "looking too good."

It is not yet clear weather the expression "looking too good" was meant literally or metaphorically, nor why Winter was relieved of her duties.

Developing ...
Posted by Pertinacious Papist at 9:10 AM No comments:

Old Dominion, NC (WZIP 1/6/07) -- That's the buzz around campus, anyway, according to several staff and faculty sources. The facts, apparently, are that Lenoir-Rhyne University Vice President and Dean of Long Range Planning, Nikita Cartwright Smith -- famously known as "La Femme Nikita" -- was the animating spirit behind the LRU administration's plan to raze Highland Hall," which was built originally as a residence hall generations ago and most recently served as a faculty office building. The demolition was carried out during the last week of May, 2007, over the protests of numerous LRU alumni.

Long at loggerheads with some of the more conservative University faculty and staff over various campus policies, Smith has been on the cutting edge of promoting progressive policies, even where this has sometimes rankled the sensibilities of more traditional-minded faculty, staff and students. "This building was a rat-infested eye-sore," she was quoted as having said, by a source who asked to remain anonymous for security reasons. "I want to avoid having my knee caps busted," said the source.

One professor whose office was housed in Highland Hall for many years is Dr. Richard McNealy, Professor of Classical Mesopotamian Languages. "I am grateful for the office Lenoir-Rhyne provided me in Highland Hall over the years. It had become very dear to me," he said. "I taught some of my best seminars in Ugaritic in my third-floor office, even though it had no heat in the winter or air conditioning in the summer. My students and I developed a real sense of solidarity parsing Ugaritic verbs around a kerosene heater during the cold winter months."

LRU administration officials could not be reached for comment.

However, a political science professor, Ingred Tillman, opined: "It is hard to imagine how this old building -- hoary with age and tradition -- did not rankle the progressive and slightly-left-of-center sensibilities of Nikita [Smith] whenever she saw it. Her office in the Lindberger building, is adjacent to Highland Hall."

According to WZIP sources, the University master plan called for the razing of Highland Hall. "Come hell or high water, Nikita wouldn't let anything stand in her way," said one former tenant of Highland Hall. "She's just lucky Professor Emanuel McGitlin is retired and no longer around, or she'd surely have hell to pay."
Posted by Pertinacious Papist at 4:27 AM No comments:

Old Dominion, NC (WZIP 2/19/07) -- A senior professor at Lenoir-Rhyne University made history today by garnering a pay hike by resigning and getting himself re-hired by the University as entry-level assistant professor.

Allen Chomsky gave up tenure as a full Professor of Mathematics at LRU at age 48 when he resigned his position.

"Why did you do it?" WZIP asked Chomsky in private interview. "I have several kids in college and my wife and I were finding that we just couldn't make it on my LRU salary and the Federal Food Stamp subsidies that have been part of our benefits package here now since February 6th."

"Then why did you re-apply for an entry-level position in your own Department at LRU again?"

"Because I learned, when I was on a search committee interviewing other applicants, that we were offering better salaries to our in-coming professors at the 'assistant' level than we were to our full professors," said Chomsky. "The whole thing was pretty insane."

When asked if he planned to take his case to the American Association of University Professors to press charges, Chomsky declined to comment.

It remains to be seen whether other senior members of the LRU faculty will follow suit after seeing the pay hike that now Assistant Professor Chomsky has garnered for himself. LRU administration officials could not be reached for comment.
Posted by Pertinacious Papist at 8:03 AM 1 comment:

George Riley, a university public relations spokesperson, speaking on behalf of the administration, said that no expense had been spared in finding the best possible architects to submit bids for the project. 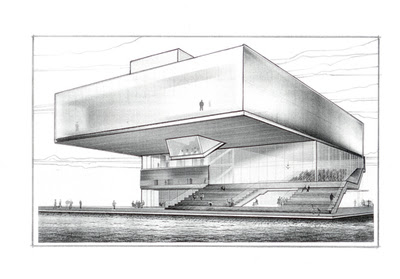 "We're all about academic excellence here," said Riley. "We aim to recruit from the most elite ranks for our program in Bowling Science, and so we intend to do our best to provide the ultimate in academic facilities for these students."

When asked about the fate of the School of Metaphysics, whose program had earlier been described as "growing" and "quite popular," Riley replied that earlier estimates had been based on misinformation.

"We just did not have accurate data at the time of the initial Rudisill donation," said Riley.

The Rudisill family had donated $6.1 million on February 7, 2007 for programs in the LRU School of Metaphysics.

WZIP learned over the weekend that Mrs. Abigail Rudisill is continuing plans to sue LRU for its plans to redirect the funds from the Rudisill family gift for its new program in Bowling Science.

Artist's drawings for LRU's state-of-the-art Center for Bowling Science depict a variety of different plans. One Bauhaus design calls for a structure covering the equivalent of two football fields with multiple levels and a total of 50 bowling lanes.

"We expect any student in the United States -- or the world, for that matter -- to look to our graduate program in Bowling Science," said Dr. Jimmy Holman, Chair of the School of Bowling Science at LRU.

Holman is the recent recipient of the John Jay Rudisill endowed Professorship of Bowling Science at Lenoir-Rhyne University.
Posted by Pertinacious Papist at 5:57 AM No comments: